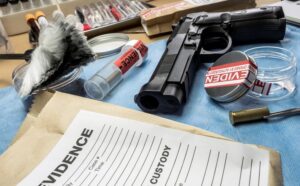 If you’re facing guns or weapons charges in the state of Ohio, you need an experienced defense attorney on your side. Steven S. Nolder, Attorney at Law, represents clients facing weapons charges, firearm crimes, and more in Columbus. Our gun charge attorney will hear the details of your case and craft a defense strategy based on your unique circumstances. Don’t attempt to fight gun charges in Ohio on your own. Get in touch with us today to get started on your case.

Defending You Against Common Firearm Offenses

Our firearm Charges Defense Attorney is experienced in defending Ohio residents against firearms offenses and guideline applications that are commonly encountered in federal court.
First, the crime of being a felon in possession of a firearm, in violation of 18 U.S.C. §922(g):

The elements of this offense are:

The State of Ohio has a counterpart to this statute—possession of a weapon under disability. The distinction between the two crimes is that a felon can violate Ohio law by possessing a firearm that had been manufactured in Ohio and never left the state. In contrast, to trigger the application of federal law, the firearm must have been manufactured outside of Ohio and, at some time, found its way into the state. Being a felon in possession of a firearm carries a potential statutory penalty of up to ten years in prison.

The second type of gun crime frequently seen in federal court would be a §924(c) offense.

This offense implicates the felon in possession of a firearm statute, but the statutory penalties are dramatically enhanced by the felon’s prior record. For this enhancement to apply, the defendant must have a least three prior felony convictions for either “violent crimes” or “serious drug offenses.” The phrase “violent crimes” is relatively straightforward, but the phrase “serious drug offenses” necessarily means the prior conviction must carry a maximum sentence of ten years or more. A person violating the ACCA faces a mandatory minimum sentence of 15 years and a maximum of life in prison.

The final way in which guns are commonly implicated in federal cases is through a sentencing enhancement in drug cases called a “gun bump,” under USSG §2D1.1(b)(1). A gun bump results in a two-level enhancement to a person’s guideline range when a weapon is “present” in connection with a drug offense. Once this guideline enhancement is triggered, the burden shifts to the defendant to show it was “clearly improbable that the weapon was connected with the offense.” If the defendant does not shoulder his burden, his base offense level is enhanced by two levels. Finally, if there is an independent conviction for a §924(c) offense, this guideline application is not used.

Owning and possessing a handgun is a serious responsibility and should be treated as such. In the state of Ohio, a person under 21 years of age can possess a firearm, however, it is a crime to furnish a firearm to someone under 21 years old, except in the cases of lawful hunting, sports, or educational purposes. A person under 21 cannot buy or attempt to buy a handgun or ammunition. Ohio allows for the open carrying of firearms with some restrictions. You are not legally allowed to carry a firearm in a motor vehicle unless you have a license to carry a concealed handgun. You must report any lost guns in Ohio, or you could be subject to a misdemeanor. The state of Ohio allows for firearm use against aggressive dogs, and gun owners are not required to have insurance. “Hollow-point” bullets are not restricted in Ohio. Be sure to contact our firearm charge defense attorney for any other questions.

Punishments for Firearms Convictions in Ohio

There are other weapons charges in Ohio that our gun offense lawyer can defend you against, including carrying concealed weapons, weapon upon disability, improperly handling firearms in a motor vehicle, possessing criminal tools, possession of a firearm while intoxicated, and more. The penalties for gun charges in Ohio depend on whether you were charged with a felony or a misdemeanor. Charges can range from a fourth-degree misdemeanor which carries up to 30 days in jail and a fine of up to $250 all the way up to a third-degree felony which comes with up to five years in prison and a fine up to $10,000. Ohio gun convictions can also result in many potential collateral consequences, including difficulty maintaining employment or finding a job, difficulty being approved for rental housing, and much more.

How Our Gun Offenses Attorney Can Help

If you’re in trouble with the law and facing charges related to a firearm or other weapon, you need an experienced and aggressive weapons charges lawyer on your side. The legal team at Steven S. Nolder, Attorney at Law, is here to represent you and help you better understand your charges. Contact us today to allow us to get started on your case.